President Yoweri Kaguta Museveni on the 15 th August 2016 presided over the pass-out ceremony of 1,548 Prisons warders and wardresses at Kololo ceremonial grounds.

His Excellency praised the Uganda Prisons’ Service for exhibiting professionalism in their work especially in the area of making furniture. He said that he will soon issue a directive to all Government Departments, including State House, to buy furniture made by the Uganda Prisons Industries.

The President hailed the Prisons’ Service for providing prisoners with correctional and skills services through the rehabilitation programmes provided. He pledged more support to the Service.

He further commended the institution for taking up his advice to grow cotton that is crucial in the textile industries, the making of animal feeds, cooking oil, gun powder as well as growing maize where seeds will be obtained for distribution to farmers in the country.

He strongly advised the graduands to remain healthy and avoid situations that can lead them to contracting the HIV/AIDS scourge. 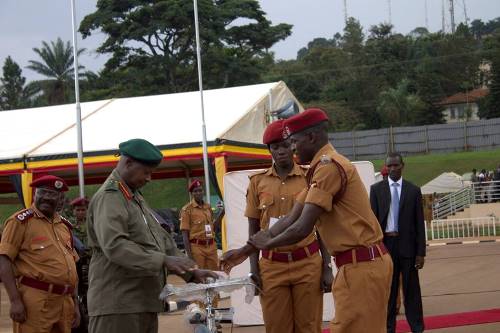 “Health is wealth. Please avoid alcohol and immorality. Don’t squander your life through indiscipline,” he counselled.

The Commissioner General of Prisons, Johnson Byabashaija applauded the President of his continued support to the service but highlighted the pressing challenges faced by the department like the increased prisoner population, the inadequate housing facilities for staff and the need for a senior staff and command college for Prisons.

He further paid tribute to the Army (UPDF) and Police (UPF) for their continued cooperation and support to the service. The Commissioner General assured his Excellency that the Service is well grounded in attaining the National Development Goals.

The graduands successfully completed their 9-months training at the Prisons Academy and Training School in Luzira.