INMATE GRADUATES WITH BACHELORS OF LAW.

The Deputy Chief Justice, Hon. Justice Alfonse Chigamoy Owiny Dollo, on March 22, 2018 presided over the first Bachelor of Law graduation ceremony at Luzira Upper Prison. He described the event as a ground-breaking occasion that will inspire other prisoners. 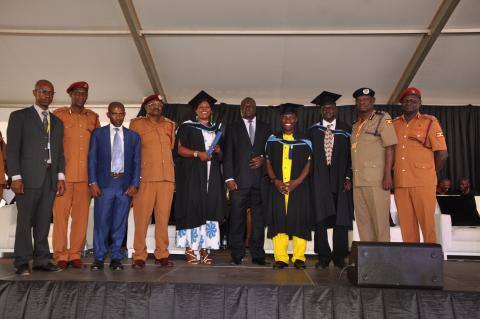 Ms Susan Kigula, Mr Pascal Kakuru former deathrow inmates and Mr Moses Ekwam who was exonerated on appeal, were admitted to the University of London through correspondence after completing their A-level from Luzira Inmates Secondary School.The University in partnership with African Prison Project offered the course to create positive transformation and rehabilitation.

The DCJ said the graduation is a clear testimony that custodial sentences are not the end of the road for convicts. "Education in whatever form is the best tool to transform an individual or society. It is therefore quite gratifying that the graduates before us, seized the opportunity and made very good use of their time in prison," he said.

He further thanked the Prisons Service for embracing and promoting inmate formal education as one of the key interventions for rehabilitating prisoners. Hon.Justice Dollo thanked the graduands for joining the legal profession, which he described as "one of the most sought after professions".

The Deputy Commissioner General of Prisons, James Mwanje, said the Prisons Service objectives are to promote and increase accessibility of formal and vocational skills training to all inmates countrywide.

The function was attended by diplomats of the European Union, representatives of the different Justice,Law and Order Sector institutions as well as representatives from the University of London and officers from the Kenya Prisons Services.